IS CLAIMS PARIS ATTACKS, WARNS OPERATION IS “FIRST OF THE STORM”

The statement details nothing that was not publicly available information from news reports:

“Terror groups, when they claim credit for attacks, will sometimes include details of the planning or execution that establish the group was indeed responsible. There are none here; the statement details nothing that was not publicly available information from news reports. It also includes no biographical information on the attackers, even a name or photo, though terror groups will often lionize its attackers as “martyrs” in such statements.”

Eight suspects identified were EU citizens. A Syrian passport was found near a ninth suspect, but its legitimacy has come under question by everybody including French and German authorities.

“A third red flag is the fact that the passport concerned was found in the first place. Analysts find it strange that a bomber would remember to bring his passport on a mission, particularly one who does not intend to return alive.”

Additionally, there is the fact that the passport remained intact while the suicide bomber did not. French and German authorities say ISIS may have planted the passport to turn public opinion against refugees:

“all these strikes are targeting abandoned empty locations.” 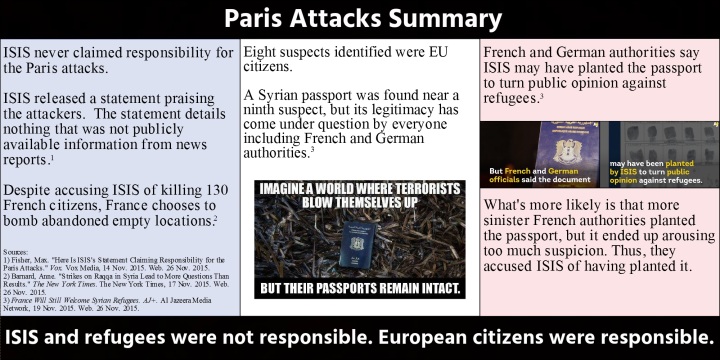 People have to be very careful when reading these articles. The headline and first paragraph say ISIS claimed responsibility:

However, they specifically imply throughout the article that ISIS did not claim responsibility. (The New York Times and many papers did this with Hamas during the 2014 Gaza massacre. The headlines would say Hamas claimed responsibility while the rest of the article implies that they didn’t.)

ISIS celebrated the attacks. They never said they did it. Here is a translation of one of the messages from the groups encrypted messaging accounts:

In fact, throughout The New York Times article, there is continued debate between whether to blame ISIS or Al Queda. (Obviously, if ISIS had actually claimed responsibility, they wouldn’t be debating between blaming ISIS or Al Queda throughout the article.)  The reality is that it might not have been either group but they need to pin it on either ISIS or Al Queda so they can declare war. If it was just homegrown terrorism exploiting Islam, they would not be able to go to war, so they pretend it’s not even a possibility.

Additionally, if ISIS was going to claim responsibility and declare open war on France, an encrypted internal communique isn’t going to achieve that.

(Another scenario is that ISIS was trying to do it in secret, didn’t want France to know, and the internal communique accidentally exposed that they were responsible. However, the encrypted message only showed that ISIS knew of the attacks and praised the attackers. They never said they did it.)

The best evidence they have linking ISIS to the crime is the encrypted internal communique which actually implies ISIS didn’t do it.

If ISIS had done it, they would have been more arrogant and self-congratulatory rather than merely applauding the work of others.

Thus, I highly doubt it was ISIS.

The moment I open Facebook or Twitter, I notice the French flag on half the profile pictures and avatars.  The entire planet and a bulk of Muslims were forced to show the type of respect for the victims of the recent Paris attacks that imperialist powers never seem to show anybody else in return.  The victims of the attacks were genuine victims, yet everything surrounding the attacks from media coverage, to global solidarity movements, was driven by more sinister forces of imperialist hunger.  Many Muslims would have condemned the attacks regardless, but one could easily sense a fear among the Muslim community not to show extra deference towards the loss of life for one of the members of the family of elite imperialist powers.

It wasn’t really Muslims as much as people exploiting Islam who were responsible for the crimes, but the only reason the Paris attacks gained such global recognition was because Muslims could be used as scapegoats which could be leveraged into greater warfare in the Middle East.

(There is no evidence that ISIS was responsible, but Hollande had no problem declaring war against ISIS.)

One would think that the overfocus on the Paris attacks versus other atrocities around the globe displays a horrible exalting of Western lives over the lives of non-Westerners.  However, when one takes a closer look to reactions to other Western tragedies, an even more disturbing trend appears: 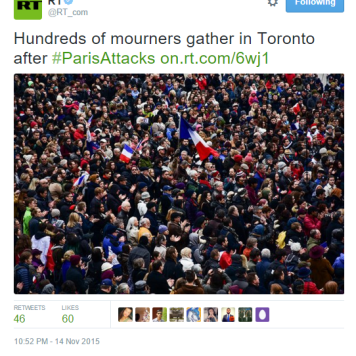 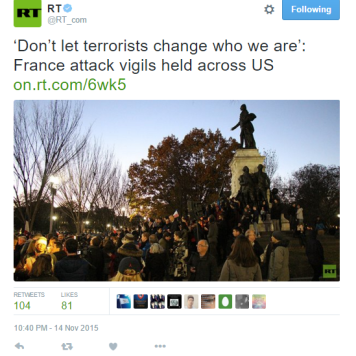 However, Toronto did NOT hold vigils after the 2013 Lac-Mégantic train disaster where 47 French Canadians died.  And there were no vigils held outside Washington after the 2014 Oso mudslide claimed 43 American lives.  (People can correct me if I’m wrong.)

Thus, people who don’t even mourn the death of their own countrymen if the disaster occurs in the next state or province will mourn the death of foreigners from across the Atlantic as long as Muslims can be scapegoated and war can be declared.

Additionally, after the 2011 Norway attacks, there were no international vigils mourning the 77 lives taken by radical anti-Muslim extremist, Anders Breivik.

However, had people exploiting Islam been responsible for the Lac-Mégantic train disaster, Oso mudslide, or the Norway attacks, there would have been extensive international media coverage and vigils held across the globe for the victims.

This infographic says it all: http://i.imgur.com/Vlu7Om0.png 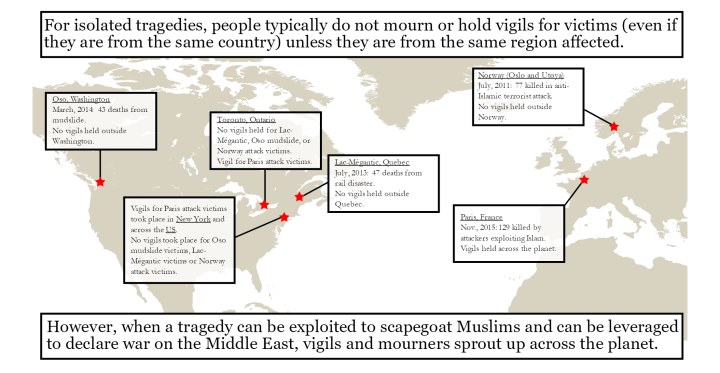 Additionally, showing too much solidarity with France (despite being a kind gesture from more genuine people) can actually have a negative impact.  I encourage people to read these arguments for why showing solidarity with Palestinians would result in much greater peace:

1) France has enjoyed great peace and security since WWII and will continue to enjoy great peace and security. Palestinians have endured nothing but horrible suffering and oppression since the aftermath of WWII where routine massacres, housing demolitions, kidnappings, and lack of basic resources has been the norm (and still is.)

2) Showing solidarity with Palestinians could actually achieve positive results by putting pressure on Western states to stop supporting Israel, resulting in the potential for greater peace and security for an oppressed population.

Excessive solidarity with France is already being exploited and leveraged by imperialists to escalate violence and do more harm to innocent people and doesn’t do much to help the French victims of the attack.

3) France doesn’t actually need the extra display of solidarity. France is a first world country that is fully equipped to handle the situation on their own.

Palestinians are a stateless, defenceless people with no military and no foreign support. Palestinians have had to endure FAR worse than the French for decades and will CONTINUE to endure far worse if things continue the way they do.

To sum up:
Showing solidarity with Palestinians could lead to greater peace.
Excessive solidarity with France is already being exploited by imperialists to put more innocent lives in jeopardy. 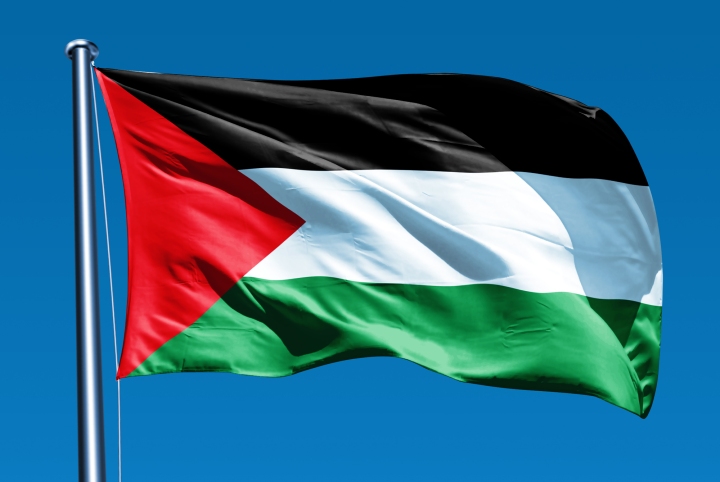